What SoC is Sony using in the new A and ZX Walkmans? 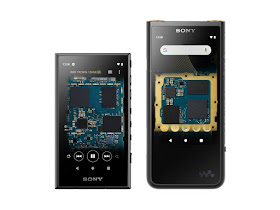 Last month in an interview with Sony's Ryogo Tsukigi on Philweb, quite a few new details emerged about the new A and ZX Walkmans. The first, measures were taken to reduce the noise from the Wi-Fi chip and SoC; second, high resolution streaming services will be downgraded to 48Khz/16bit; and finally, the new A/ZX Walkmans were using a 1.8Ghz quad-core SoC but the manufacturer/specifications were not mentioned.


The first point was already known since Sony mentions it on both the A and ZX product pages, but the second with the down sampling to 48khz/16bit is news to me.  The down sampling is due to restrictions from the SoC, which is an unknown quad-core 1.8Ghz cpu at this moment. So with the imminent release of the new Walkmans, it was time to investigate to see what I could discover.


The numbering above is identical to the ZX500 below.


1. SK Hynix chip - I am not able to make out the writing but in the older ZX300, SK Hynix was used for the NAND e-MMC. Not sure if this is the same case here, I will explain below in #3, so this might be the DRAM for the device.


2. Unknown NXP/Freescale chip - This could be the SoC, since Freescale does have ARM based SoCs. Looking closely at the label, it seems to end in ZAA.


3. Koxia e-MMC 32GB (2D 15nm flash Memory) - THGBMJG8C2LBAIL - This appears to be the e-MMC, which would make the SK Hynix chip the DRAM like I wrote above. Koxia used to be Toshiba memory.


4. Unknown chip for now, I initially thought it was the NC chip but the size might be too big, and the ZX500 also has it and that is lacking NC. So perhaps it is some controller for something. 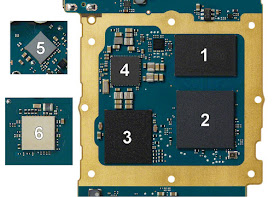 There are no proper teardown photos of the ZX500, but Sony has provided us with a photo of the PCB, although not labelled. I have labeled the chips like in the A-Series with the 2 on the left as cutouts since they are on the reverse side. 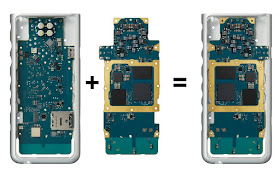 I decided to see if I could find the sizes of chips, so I made the above photo. I combined the 2 photos and using the width and length of the player, I was able to determine a scale for the image. I averaged out the length and width scaling in order to have a more consistent measurement.


We know the size of the Koxia e-MMC, THGBMJG8C2LBAIL. Googling that product code, shows a dimension of 13mm x 11.5mm, which matches what I calculated. So I know that my estimates are close if not the same to the real dimensions.


Ok now to the SoC/CPU. I found an early review of both the A and ZX Walkmans but by a user on twitter, kunkoku. He has 2 great reviews up for the A-Series and ZX-Series, they are in Japanese but I highly recommend checking them out and using translator to read the reviews. Anyways, in the reviews, kunkoku installed both CPU-Z and Antutu on the Walkmans to see the hardware specifications, apart from the ICX codes, which I have updated here, we have some information about the SoC and RAM.


Unfortunately the CPU name/manufacturer is not listed, but this does not mean we cannot find it out. But before I go on, it is interesting that both the ZX-Series and A-Series have 4GB of RAM which is impressive for a Sony MP3 player. I would imagine this is because Android is being used and that can eat a lot of RAM.


Focusing back onto the SoC, we can see the GPU vender, Vivante Corporation, and specifically the renderer, Vivante GC7000 Nano Ultra. So who uses Vivante's GPUs? Well quite a few companies as seen in the Wiki, but focusing on the GC7000 Nano Ultra, only one company uses this GPU for their SoC, NXP/Freescale in the NXP i.MX8M Mini. The wiki section on this SoC does not specifically mention the GC700 Nano Ultra, but in the product brief PDF, the GC Nano Ultra is listed in the block diagram. More information about the chip can be found on NXP's website here. 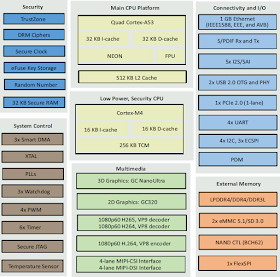 Looking at the CPU in this SoC, the specifications are the same as in CPU-Z/AnTuTu, quad-core Cortex-A53 at 1.8 GHz. If we look at the part numbers in the product brief, it looks like Sony is using the i.MX 8M Mini Quad, or MIMX8MM6DVTLZAA.

Now recall at the beginning I mentioned NXP/Freescale chip (#2) had writing on it that ended with ZAA and this matches the chip number here. Likewise the size of the chip here, is 14mm x 14mm, the same size which I calculated from the NW-ZX500 PCB. So there we have it, Sony is not using a Mediatek, Realtek or even a low end Qualcomm SoC, but a NXP/Freescale chip.


So why this chip and not something more high end? I suspect the reason might be with Sony's desire to isolate the Audio circuits from the communications circuits and using an all in one SoC with BT/WLAN was not an option. Looking at some Mediatek SoCs, there are some without cellular connectivity so perhaps price was a factor or maybe something else.