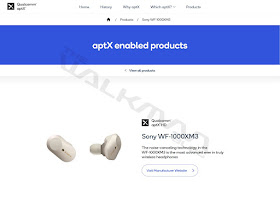 Sony's WF-1000XM3 has been praised as one of the best wireless NC headsets but nothing is perfect. The lack of LDAC support is one of those issues raised. So to see the WF-1000XM3 on Qualcomm's aptX site showing support for aptX, a competitor for Sony's LDAC is surprising and puzzling. Could this mean we will see aptX support soon in a future firmware update? Or is this a mistake?


Update March 03, 2020. Looks like Qualcomm took the page down. So either it was a mistake or they put it up too early. See the screenshot below from the website. While the page may be down, the link to the photo still works, so aptX support might still be coming in the future.

First to address the missing LDAC support. Sony claims adding LDAC would have reduced the listening time significantly on the WF-1000XM3 and their aim was for longer battery life, an issue on the original WF-1000X. The interview can be found here, I have extracted out the text, it is Google translated though.

Because we want to emphasize the Sony WF-1000XM3 to have a longer usage life Consume less battery. Including the importance of the signal of the headphones on both sides that will not be missing from each other. In truth, we understand that users want good quality audio files such as LDAC, but now for the ears. Listen to True Wireless We have to ask for more information to make the sound file quality work well and effective on True Wireless headphones. But we believe that the QNe1 processor chip of this model headphones with DAC can deliver very good sound quality even when not using LDAC.

The part that doesn't support aptX is because we have to use a special chip or processor from CSR (now Qualcomm).

So what is the deal here? From my understanding both aptX and LDAC are software based codecs, so technically no special hardware would be required for their implementation and decoding of the codec but perhaps Qualcomm requires customers to use a Qualcomm chip in order to have access to the aptX license. If anyone knows, please leave a comment below.


Of course there is a chance that aptX does not require Qualcomm hardware (BT, SoC) for its implementation at all, and only a license fee is required to use it. So that would mean the WF-1000XM3 could have aptX added via firmware update (same for LDAC) and Sony would just need to pay for a license. This is highly possible, with Sony mentioning in one interview, that further firmware updates are coming.


So if we go with this option, and assume the Qualcomm aptX website is accurate, aptX is coming soon via a firmware upgrade and Qualcomm accidentally revealed this information. But I will mention, both the NW-A100 and NW-ZX500 support aptX HD and they are not listed on Qualcomm's aptX website. So perhaps this is a mistake, but then again it could be true.

So looking at the aptx site, it seems that the page first appeared online 2 weeks ago on the 14th of February. Using a special method on Google Search, the date can be revealed, as seen below. 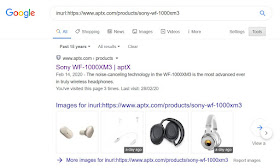 Likewise the photo of the WF-1000XM3 on the product page is listed in the directory named 2020-02. EDIT, the photo has now been removed from Qualcomm's server.


So it was definitely uploaded this month and the device is named correctly, so this aptX update might not be a mistake after all and might be coming soon. If I find anything else, I will update this post in this part of the article.


Full sized photos showing the WF-1000XM3 on the aptX site, in case the model disappears from the website. 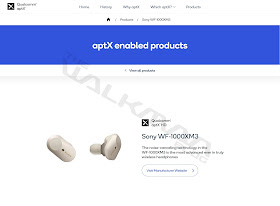